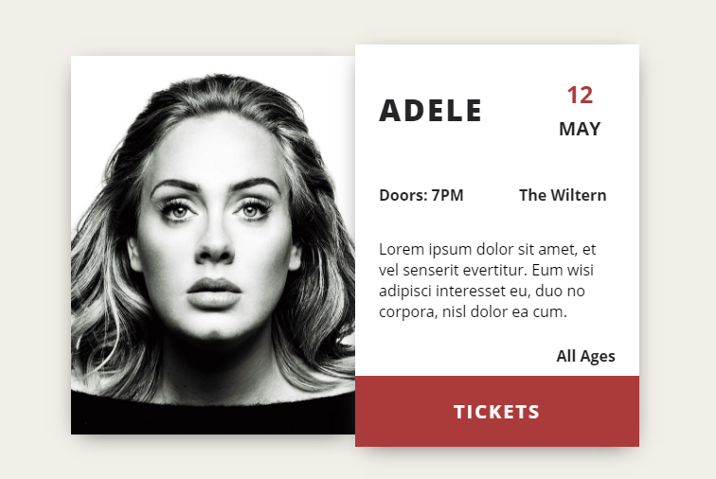 My team provided UX recommendations to 30+ music brands. I designed and coded dynamic email templates for marketers, increasing our production workflow by 45% while improving accessibility for fans.

My team worked as a service to provide guidance, support, and technical expertise for individual music venues. At a national level, I designed user email journeys, coded and maintained dozens of email templates, and provided UX recommendations to marketers.

Live Nation is an American live-events company focused on worldwide concert and entertainment-show promotions. Live Nation owns venues around the world including House of Blues: a Rock and Blues-themed chain of live music venues that feature southern-style restaurants, special event venues, and exclusive high-end music membership programs. House of Blues (HOB) owns and operates dozens of independently-branded theaters, concert venues, and comedy clubs across the US in addition to their House of Blues branded venues.

All venues report to a national director. There are two who manage the brand and promotion strategy. One for HOB, and one for the remainder of HOB-owned venues. Each venue has its own marketing staff between 1-5 people that craft marketing strategy for the venue. 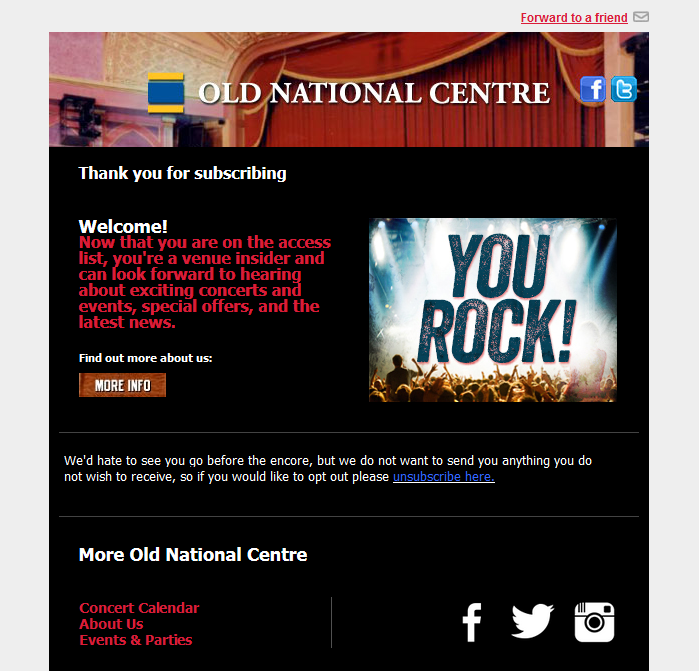 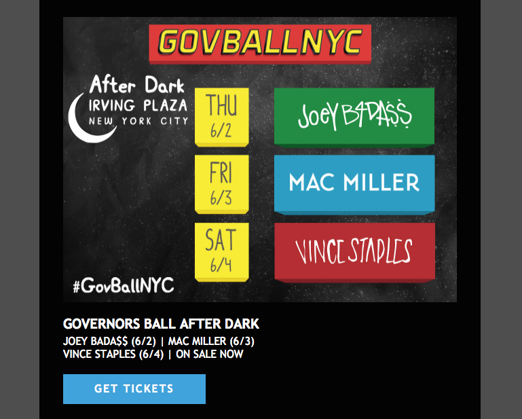 My team to make it easier for marketers to focus on creating content and move management of campaigns, welcome journeys, and testing up to the national level. At the same time, I had to create a system where venue-specific information like social media accounts, offers, and event details could be managed by venue marketers and pushed into national campaign efforts.

Having these multiple points of entry combined with a large number of independently branded and managed venues led to deep fragmentation in communications infrastructure. This split increased email production costs, made technical and design changes to email templates costly and time-intensive, and did not allow for a personalized, user-centric experience for our subscribers. I was tasked with consolidating templates and entry funnels to create a guided, personalized journey for fans that could be managed at the national level.

In addition to improvements for tens of millions of subscribers, I also needed to overhaul the experience for ~100 users of our internal email creation system. Marketers would build and manage the content for their own welcome emails.

These four goals were intended to improve fan image of the brand, increase engagement over time, and prototype nationally-managed communications at scale. 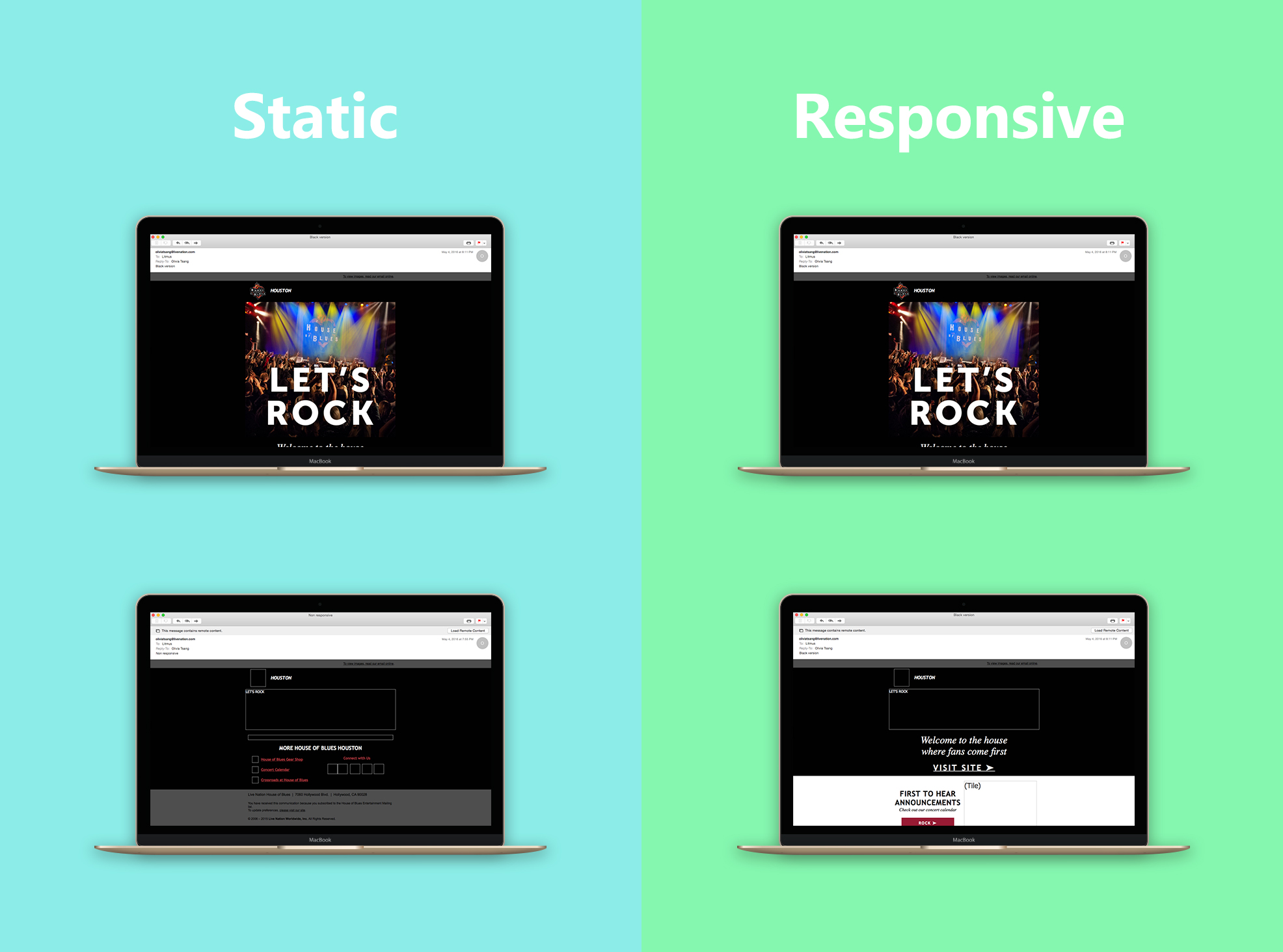 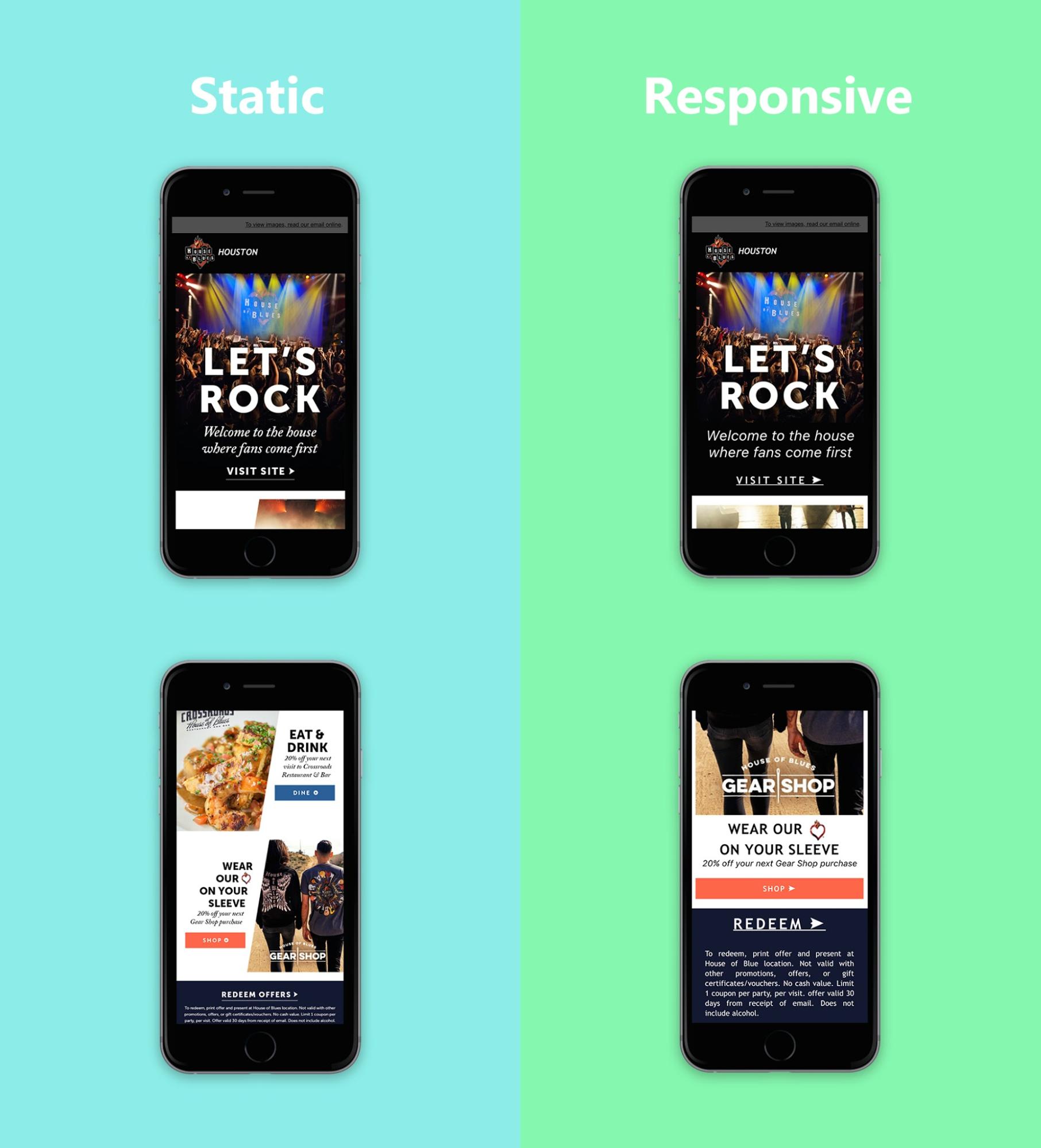 I audited existing welcome emails from a sampling of venues. This survey resulted in a clear division between House of Blues-branded venues and all others. My team found it most efficient to trial this new form of communications in two broad strokes before determining if segmenting further into venue groups was warranted.

To simplify our data challenges, we focused on first-party web-based signups for the duration of the tests. This approach meant that only new ticket purchasers and web/social subscribers would receive the new communications.

This project had my team working across multiple business divisions and companies to wrangle data for dynamic content, personalization, and legal requirements.

Working with internal stakeholders, I identified goals from a UX and growth standpoint. Ultimately, the new communications were meant to establish tone, branding, reaffirm subscription value prop, and integrate subscribers seamlessly into existing communications. After establishing these goals, I mapped out three phases for ramping up data complexity. The first phase required the most radical change to how the company wrangled subscriber data and content.

I had some convincing to do in terms of developing the communications infrastructure necessary to improve the experience for subscribers.

We worked with an account manager and technical architect at Salesforce to create our journey inside a newly launched tool, Journey Builder. Due to Live Nation’s unique business structure, our communications strategy required the creation of several internal and external tools to manage everything. Our team was the first to implement such a project at scale with Salesforce.

I created prototypes to show stakeholders the benefits of live, responsive design. We can see the static, image-based communications in light blue, and the live, responsive versions in green. Email specifically benefits from responsive design due to image support varying across clients, images commonly being turned off, and how multiple device sizes display text in images. In addition to the normal benefits afforded by responsive design, the nationally-managed program my team wanted to implement would have been impossible with static design.

The new infrastructure would populate data dynamically from a centrally-managed interface where marketers could input data and emails could be generated automatically.

On my team, I worked with a Data Manager, Campaign Manager, Graphic Designer, and several National Marketing Directors to plan the foundational journey for newly acquired subscribers. I looked at existing emails and previous audits of the effectiveness of those emails to determine how best to move forward. Incumbent welcome messages were generic, fragmented, and difficult to update.

They did a good job of welcoming a subscriber and setting expectations, but a lot of the success of the messaging was due to first-emails bumps in numbers that are common across industries.  There was a pretty steep cliff in terms of engagement right after the first email, and I wanted to find out why.

We hypothesized that easing subscribers into normal communications through increased brand exploration, deals, and information about how to interact with the brand would lead to better sustained engagement and increased ticket purchase. We started structuring the key information and goals for each communication.

We landed on a series of three emails after gauging past test performance over the last six months. We also wanted to create a model and test case for using a nationally managed campaign system.

I wireframed several versions of emails from the series starting with very basic text-only mockups. We refined down to wireframes.

I worked with a graphic designer who provided colors, creative, and assets for the series. I worked off an existing code base to develop new modules that could be swapped in and out with existing templates. I also coded in AMPScript the dynamic functionality, using a series of conditions to determine the content to push to users. This system and approach provide the foundation of an iterative design solution that allows local campaigns to be deployed and maintained at a national level.

I used ampscript in building email templates to generate content dynamically. Data input by marketers through a landing page generated an email based on subscriber attributes.

These templates and infrastructure allow for a variety of content to get injected into communications. Since the content is pre-approved and built using document content scripts, it doesn’t cause rendering issues so doesn’t need QAing before deployments. This freedom allows for further personalization down the line, getting closer to 1:1 messaging.

I’ve also used internal APIs to pull concert information on a subscriber-by-subscriber basis. Right now it filters down by the venue-level, but soon we’ll have more data that will allow users to self-select the shows they want to hear about.\

The new infrastructure my team and I architected allows us to treat automatically-generated emails differently from marketer-generated ones.

Our data is structured into objects, so I wanted to bring that same schema to the communication structures themselves. I visualized this process in an exercise with my team. Looking at our data this way allowed us to see possibilities we could test in the future.. It also inspired a redesign of how we presented information to subscribers. 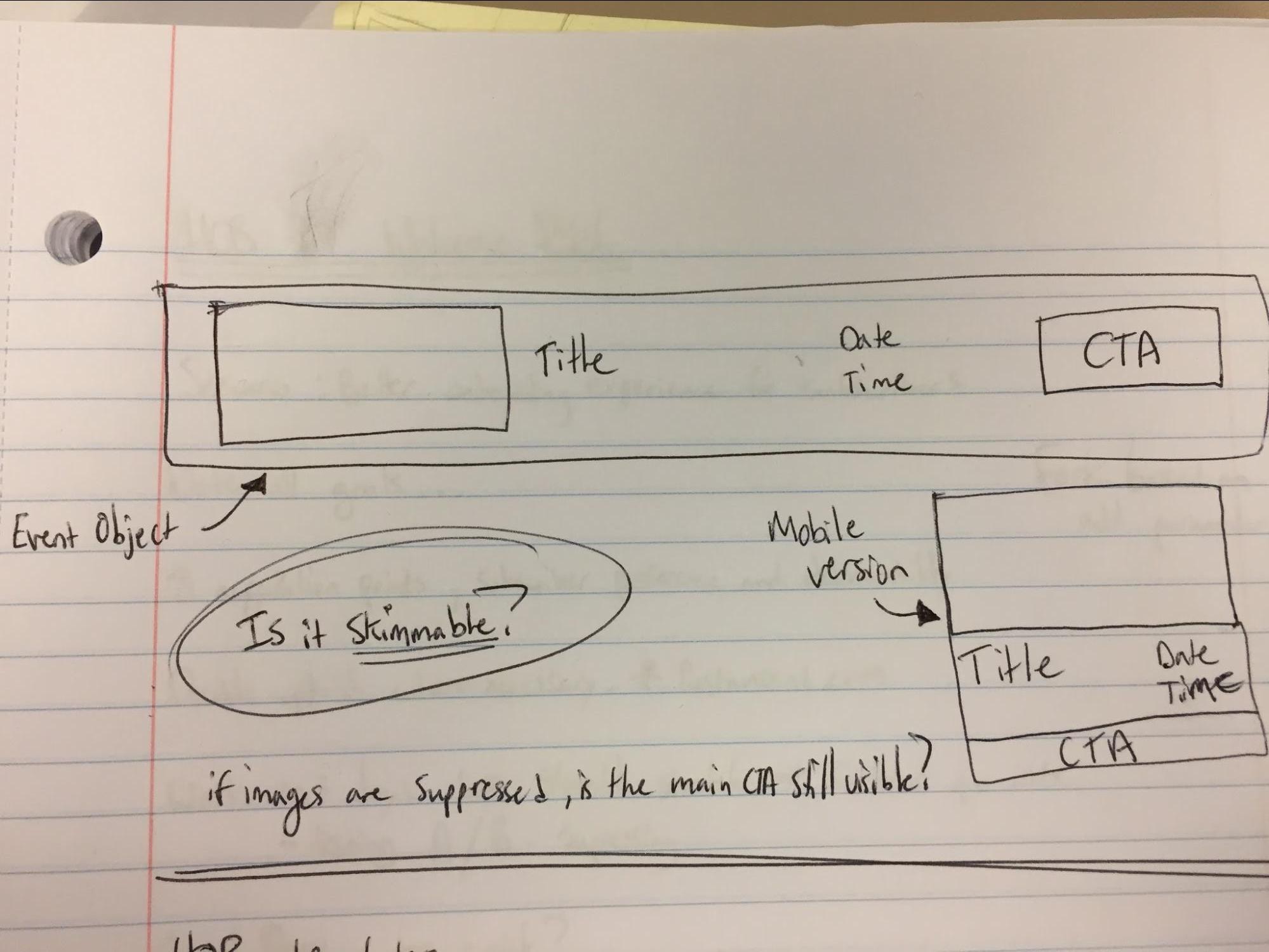 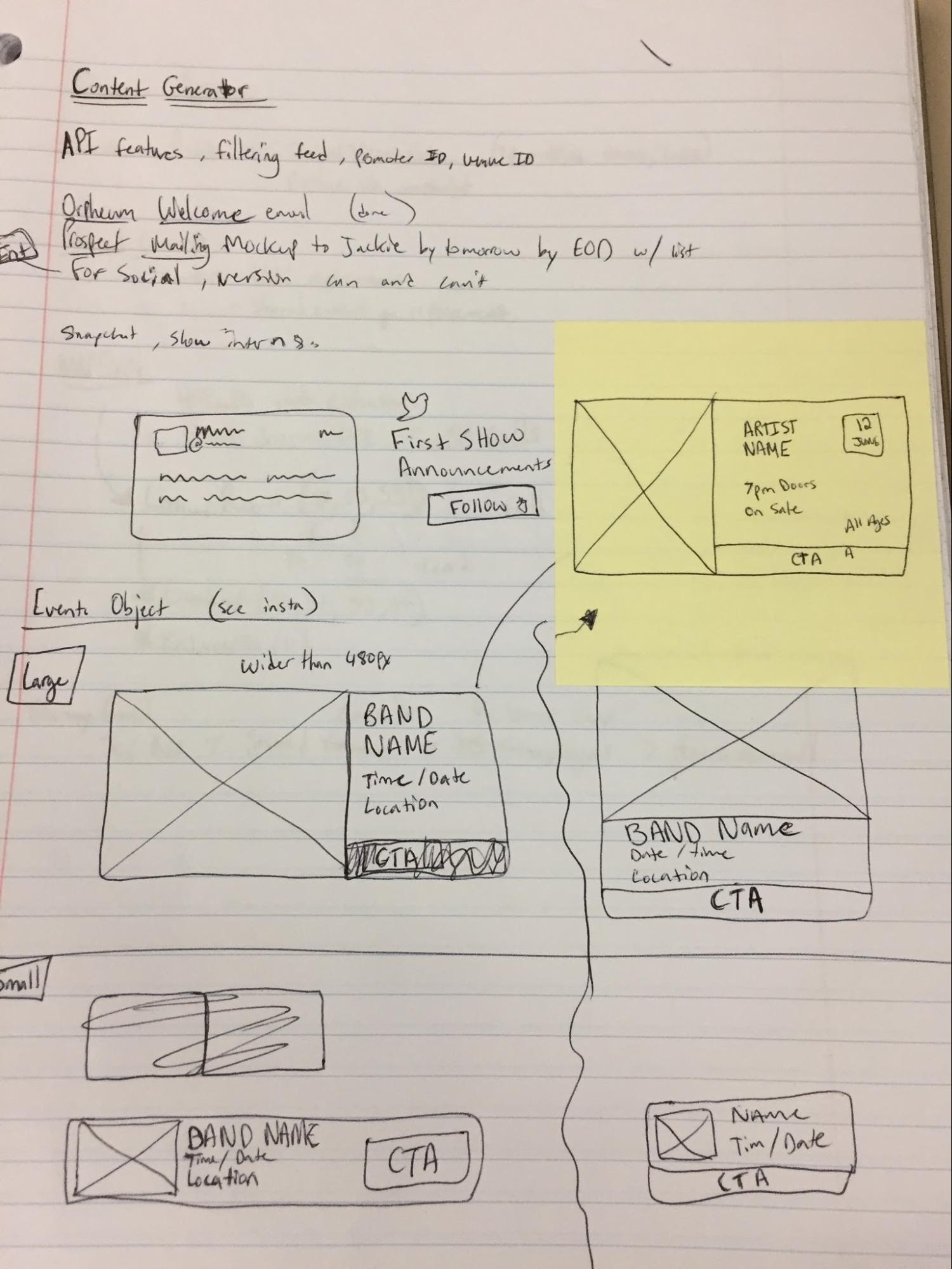 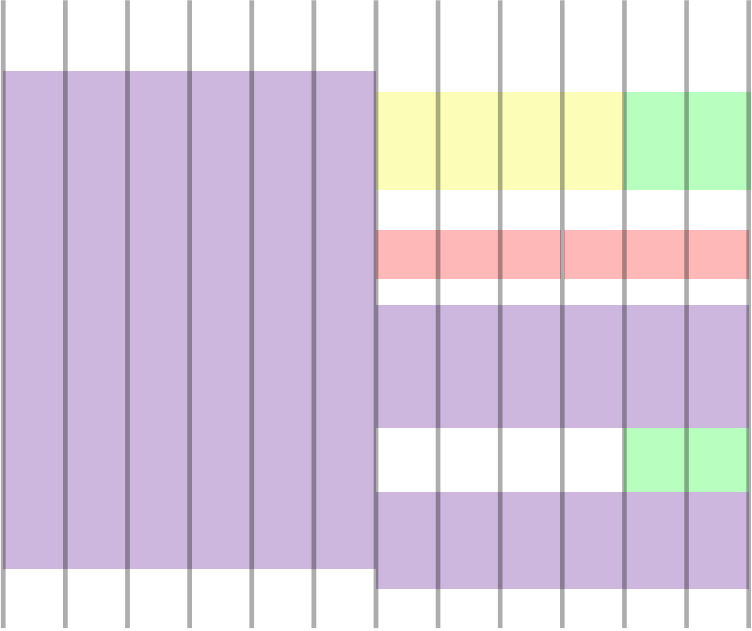 I had conversations with stakeholders and subscribers, to look at what information mattered most to them. Most importantly, I looked at data from previous tests and from other lines of business to determine what attributes led to engagement and ticket conversion.

I sketched rough wireframes to determine a structure that would take  information and arrange it in a more user-friendly manner.

The main complaints suggested lack of scannability in the emails. It was difficult to parse event time, artist, and other key information from the surrounding text or from other events.

We had used an edgeless card structure in producing event details. I went with a more defined card structure for these communications since the data would be populated automatically and not by users. I used a 12-point grid system as is common in most HTML frameworks. Knowing how the code would have to be implemented allowed me better insight into determining how the visual portions would appear.

The new card style greatly improves information that can be gathered at a glance. Since these emails are populated by algorithms, all the fields can have customizable structures to personalize layout and highlights depending on event type. Since most of our revenue for these types of communications comes from touch devices, I made CTAs tappable and prominent within the layout.

The card structure carries over to smaller events. Even though they’re the same type of information, the card format allows for artist individuality to shine within the context of the card without overwhelming the rest of the communication.

The framework allows multiple versions of each module to be coded in or produced within a short amount of time. I included progressive enhancement in the design since email clients vary widely in how things are displayed.

They start off clean, modern, and accessible, and get enhancements which improve the experience for users in modern email clients. The design is also accessible, placing as much information as possible in live text.

The new structure my team and I developed would have allowed for venue-specific customizations. This flexibility benefits the user who can receive more personal, relevant communications, and the business who decreases production costs.

The system my team developed improves journey creation by allowing for up to 50% faster production and turnaround. The system also facilitates reporting and allows for constant content testing with minimal effort.

The new infrastructure reduced the time it took to produce, QA, and maintain email communications. It shifted production work away from marketers and allowed them to focus on content without having to worry about the quirks of email development. It allowed the national team to automate and personalize communications at a scale other organizations that size weren’t able to manage. 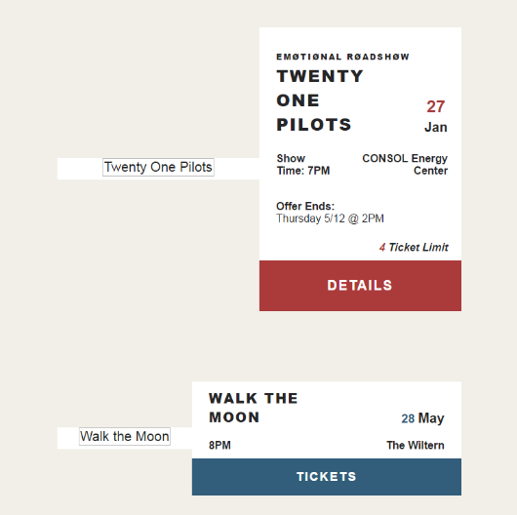 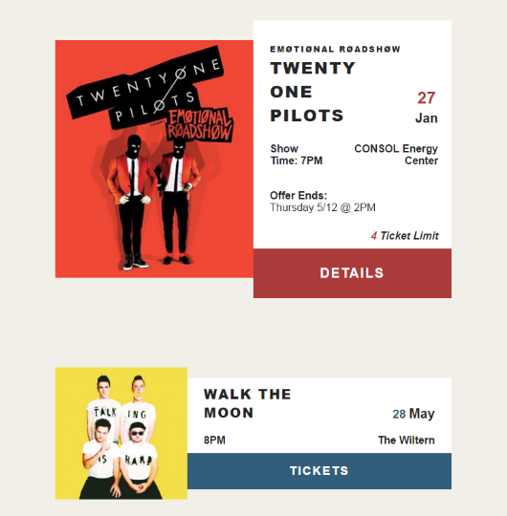 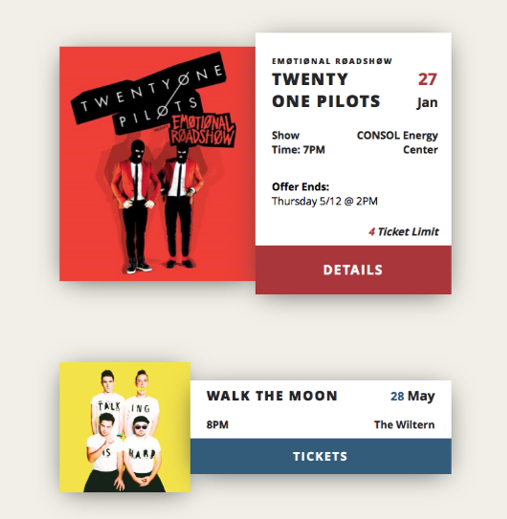